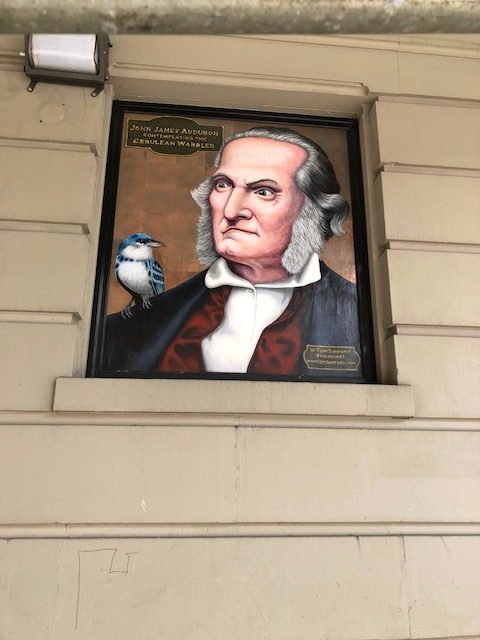 At first we noticed just a few birds–a Purple Finch, some pelicans, a Black-billed Magpie–but suddenly there were lots of birds. Owls, Fish Crows and Swallow-tailed Kites flew high overhead. Osprey, Bald Eagles and Tricolored Herons swooped past at eye-level while hummingbirds, sparrows and Mountain Bluebirds danced at our feet. Walking the sidewalks of New York has its unique pleasures. On this particular day, two friends and I were enjoying a self-guided tour through Hamilton Heights, an “uptown” neighborhood in Harlem where Alexander Hamilton lived the last few years of his too-short life. Almost forty years later John James Audubon called the same neighborhood home, and the two men loom large at the moment. While Hamilton plays nightly on Broadway a hundred blocks farther south, the Audubon Mural Project is playing in Harlem around the clock–on the sides of buildings, on roll-down security gates, on boarded-up windows.

These Harlem birds–82 to date–are endangered species, and not because of graffiti. Half of all species of North American birds are threatened by climate change. That’s what a stunning report by The National Audubon Society revealed in 2014. To be precise, 314 species are threatened by a warming climate, and that’s the number of paintings the Audubon Mural Project hopes to complete.

The Project came about serendipitously. A few years ago a small art gallery opened in Hamilton Heights, and the young owner, Avi Gitler, started looking for ways to introduce art into the neighborhood. He researched the history of the area and discovered Audubon. After getting the okay from a few building owners, he hired some professional spray paint artists to create murals of birds Audubon himself had painted, and the first few birds appeared. It just so happened that an executive at The National Audubon Society lived in Hamilton Heights. The Society had just published its report on birds and climate change, which is how a small art project turned into a much larger collaboration between Gitler and ____Gallery (love the name!) and The National Audubon Society.

What did I know about Mr. Audubon before our self-guided tour? Not much, apart from the fact he was an expert studier and painter of birds. That’s the great thing about art, how it can inspire you to delve into history or any number of mind-expanding offshoots. As I walked past the Trinity Cemetery at 155th Street that morning, a line from a song in Hamilton played in my head. “It’s quiet uptown.” It was quiet there in uptown. Hamilton isn’t buried there, because he died in 1804 and the uptown cemetery wasn’t established until 1842. It’s Audubon who is buried there, and I could feel a breeze coming off the hill. Maybe it was his ghost flitting from building to building, comparing the birds he painstakingly drew and colored to the spray painted creations of the here and now. It might take him a little getting used to, but I bet he’d be pleased. At his core, Audubon was a conservationist. Like many men of his era, he enjoyed hunting–and he also killed specific birds just to paint their portraitures–but protecting birds and their habitats became more and more important to him the older he got.

“A true conservationist is a man who knows that the world is not given by his fathers, but borrowed from his children.” John James Audubon

Compared to Hamilton’s Revolution-fighting, nation-building, scandal-riddled life, any life might seem dull. Becoming John James Audubon was no easy feat and far from dull. Like Hamilton, he was born illegitimate in the Caribbean and later immigrated to America. Unlike Hamilton, he didn’t start life poor. He was born to the mistress of a sea captain, and the captain shipped the boy home to the wife in France after the mistress died. There he led an idyllic childhood and developed an early interest in birds, but, at eighteen, he was sent off to America when war broke out between France and England. On route, Jean-Jacques became John James. By the time he decided to set off on his quest to catalogue and paint America’s birds, he’d started a successful business that failed, he’d been briefly jailed for bad debts, and he and his wife had lost two of their four young children to illness.

His wife Lucy–the kind of partner who said follow your dreams–tutored to support the family. When it came time to begin compiling his bird paintings in printed form, American publishers weren’t interested. Audubon sailed to England and found willing publishers there. Birds of America ultimately became four volumes that included 435 large hand-colored prints. The books were taller than a yardstick and almost as wide. They were sold by subscription between 1827 and 1838, and they weren’t cheap. The King of England and President Andrew Jackson were among his fans. With his new success, Audubon moved his family to an estate in Harlem, not far from where Hamilton lived out his final years. Audubon was sixty-five when he died there in 1851. Today a handful of universities here and in the U.K. have first editions of the Birds of America series. They’re worth big money. Since 2010, two have sold at auction for $11.5 million and $7.9 million.

Most people I talk to–on both sides of the political divide–care about the environment and the world we’ll leave to future generations. The Audubon Mural Project is one more wake-up call, but it’s also a fun, bird-spotting art adventure. We’re all in this together–birds, beasts, humans–sharing this habitat known as Planet Earth. Since we humans have the biggest brains, it falls to us to do what we can to protect our shared habitat. Stay tuned for Part 2: Beasts of NYC 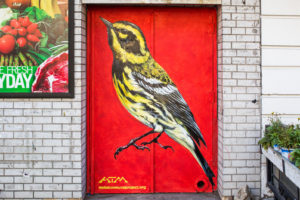