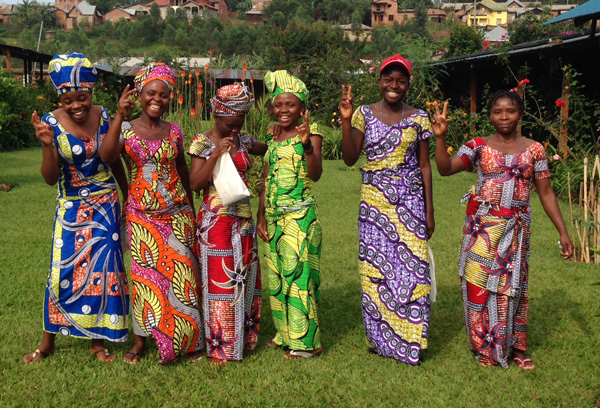 from the documentary, City of Joy

This past Sunday The New York Times ran a story about two U.N. human rights investigators killed in the Democratic Republic of Congo (DRC) in March, and the unanswered questions that hover around their murders. Reading the story was a much more visceral–oh no, I get it! experience than it would have been had I not seen the documentary City of Joy at the Dallas International Film Festival. For starters, there’s nothing democratic about the DRC apart from the fact there’s lawlessness and poverty everywhere. Unlike the Democratic Republic of Congo, City of Joy is not a misnomer, but it takes a bit of explaining to get to the JOY part. Stick with me, and you’ll get there.

The DRC is the second largest country in Africa, after Algeria. In the 15th Century, The Kingdom of Kondo in the western Congo was a sophisticated empire with its own aristocracy and a civil service form of government. The country’s problems began in the late 1400s when Portuguese traders discovered a land with many people–strong, disease-resistant natives–who could be turned into slaves by upsetting the current power structure. By the 1600s, the kingdom had disintegrated into anarchy. It’s estimated that 4 million people were forced onto ships at the mouth of the Congo River. That’s only Part 1. In 1876, the Great European “Scramble for Africa” was underway. King Leopold II of Belgium decided he wanted in. Misrepresenting himself as a man with good intentions, he hired explorer Henry Morton Stanley to travel the Congo River Basin and, by 1885, persuaded Western Europe and the U.S. to recognize the Congo as his personal property. He called it the Congo Free State, another misnomer since he looted the country–first of ivory, then of rubber–using atrocious methods. (His private army forced native men into rubber-gatherers by holding their women hostage and cutting off their hands if they didn’t cooperate.) Some humanitarian types in the western world eventually caught on, and the king was forced to turn over his private colony to the Belgian government in 1908. The “Belgian Congo” lasted until 1960. By then, it was abundantly clear that the Congo’s natural resources made it one of the richest places on earth. Its copper was used to make shell casings during WWI. Its uranium was used for the nuclear bombs the U.S. dropped on Japan in WWII. The country was also blessed with diamonds, gold, coal, oil, and countless minerals including one called coltan–today an important component of cell phones.

Part 3–Independence–was predictably disastrous. The Congolese fought for it and drove out the Belgian elite, but there was nobody they could put in place with the skills to govern wisely. Under Belgian rule, the Congolese had been allowed only the most basic of educations.  They didn’t have bragging rights to a single economist, lawyer, engineer or doctor. In short order a military man, Mobutu, took over and ruled the country as a tyrant, milking the country of billions of dollars to finance a “Versailles” life-style. Decades later, in 1997, he was forced out, and so began Part 4, the Great War of Africa. It’s a complicated story, but it began when Rwanda invaded the Congo, furious that Mobutu was sheltering many of the people responsible for the Rwanda genocide three years earlier. From that point on, other African countries jumped into the madness. Ethnic and language differences sparked further violence, but the unabated demand for the Congo’s great natural resources turned it into a powderkeg attached to a lit stick of dynamite. The developed world, including Europe and the U.S., still wanted and needed all those minerals. Rebel groups wanted a piece of the action.

The City of Joy is not the name of an actual city. It’s a small enclave in the eastern Congo inhabited by a changing group of Congolese women. The community has its own hospital–the starting point for every woman and for every good thing that’s happened since it was built.

Congolese doctor Denis Mukwege is a world-renowned gynecologist. He specializes in the treatment of women who have been gang-raped. Given the DRC’s tortured history, it should come as no surprise that rebel forces use rape as a weapon to destroy villages and consolidate power. Congolese women who are raped (but not killed in the process) are shunned by the men in their communities. Without the woman, the family unit breaks down. Children become orphans. Boys become child soliders for rebel groups–willingly or not. In 1999, Dr. Mukwege opened Panzi Hopital and began treating a rape epidemic.

Eve Ensler was visiting the Panzi Hospital in 2007 when she met a patient named Jane. Eve is an American writer, activist and playwright of the Tony-award winning The Vagina Monolgues, and during their chance encounter, Jane told Eve her dream was to build a place where women survivors could live together, heal, transform, and heal. It took a few years, but the City of Joy Leadership Center opened its doors in June 2011. Its founders were Dr. Mukwege, Eve Ensler and Christine Schuler-Deschryver, a women’s rights activist raised in the Congo. Jane Mukunilwa was a member of one of the first graduating classes. Illiterate when she arrived, she was able to read, write and count money within 6 months. Today she’s a key member of the staff.

The film follows the first class of women at the Leadership Center. Today the work continues. Ninety women, 18-30, to a class that lasts six months. Afterwards the determined graduates return to communities in the Congo. As teachers and activists, they are a powerful voice for change. Nothing seems impossible as long as there is hope–and JOY.

« The Greatest Story Ever Told: and the runner-up is . . .
A Modern INHERIT THE WIND Proves the Play Timeless & Timely »