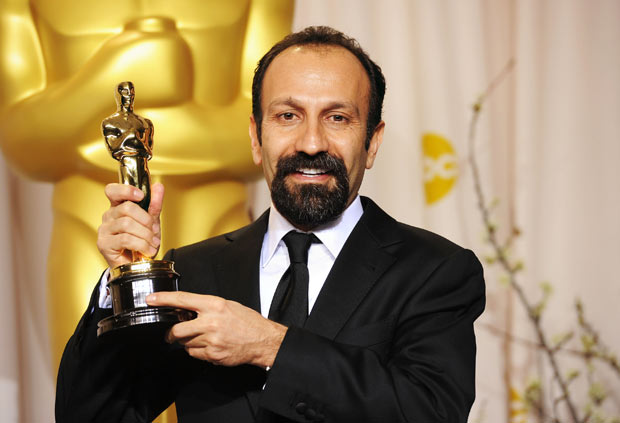 In 2012, Time Magazine named 39-year-old Asghar Farhadi one of the most 100 influential people in the world. This was the same year he won a well-deserved Oscar and a Golden Globe for his film A Separation. His most recent film The Salesman (which takes its title from Death of a Salesman, the Pulitzer Prize-winning Arthur Miller play) is again nominated for an Academy Award for Best Foreign Language Film. It’s another domestic drama–set in Tehran, Iran.

Subtitles again. But to pass on a film like The Salesman is to deprive yourself of a masterful piece of storytelling. Like Spain’s Pedro Almodovar (Julieta), Farhadi is a director who also writes his own screenplays.

The Salesman isn’t about a Willy Loman-type character–at least not at the outset. Rana and Emad, a happily married young couple, are getting ready to star in a local production of the Arthur Miller play when they are forced to abandon their apartment and find another. In the opening moments of the film, the building in which they’re living starts to shake and crack apart, forcing everyone to evacuate. An earthquake? No. The demolition of the building next door seems to be the cause, but we learn this almost as an aside–it’s no biggie, just another example of daily life in Tehran. Fortunately (a sentiment that will haunt the couple and anyone who sees the film) a theatre colleague knows of a vacant apartment in his building, and they move right in. But one night, Emad is delayed at the theatre (asked to talk to the government censors who might shut down the production), and Rana is assaulted by an unknown man while taking a shower. She ends up in the hospital with a nasty head wound. It heals but begins to infect her relationship with her husband. She’s afraid to be alone, especially in the apartment. He fails to understand everything she’s going through. There’s half-hearted talk about calling the police (which speaks volumes about the view of law enforcement) but Rana, in particular, is worried about the inevitable damage to her reputation.

The questions begin to mount. Apart from the head wound, what exactly happened to her? Did the attacker mean to assault Rana, or was he after the former tenant, a “loose” woman who left many belongings behind in her haste to move out? Emad becomes obsessed with tracking down the attacker and getting his own form of justice.

If you or someone close to you has ever suffered through a cataclysmic event that struck out of nowhere (and who among us has not?), you’ll appreciate the power of this story. Farhadi isn’t the type of filmmaker who points accusatory fingers at his characters. Instead he lets the viewer wonder: what would I do if it were me?

When he won an Oscar for A Separation, it was a first for an Iranian film made in Iran. But a planned celebration at home to honor him for the win was cancelled by the Iranian government. At the time, Iran’s President was Mahmoud Ahmadinejad, a man who claimed the Holocaust was a myth (today he might call it ‘fake news’), and Farhadi has described the eight years of that presidency as “the most bitter period of life that I remember.”

Last month he told RogerEbert.com, “There are some very radical critics from the government who hate my films, in part because they believe my work represents a negative view of Iran for western audiences.” A Separation almost didn’t get made, in part because the government objected to Farhadi’s history of supporting several filmmakers who’d been exiled. In the end, he made it without any government money. In other words, he walks a fine line doing what he does. The people of Iran are richer for it, and so are the rest of us who go to see his films. It’s doubtful we’ll be seeing him at the Academy Awards this year. He’d planned to attend, then changed his mind after President Trump’s executive order visa ban was announced–even if an exception could have been made for him.

If you’re looking for truth and a realistic look at a country that’s much in the news these days, this film–a work of fiction–might be a good way to go.

« Art Without Borders: Julieta, a new film, Shows Us the Way
A Hidden Figure in the Fashion World »